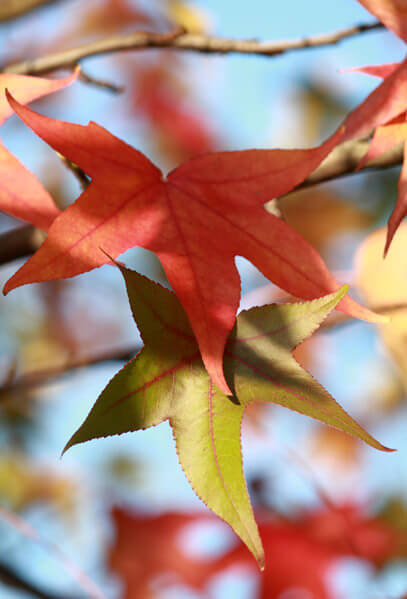 Although it feels like this summer will never end and the ocean water temperature is still in or near the 70’s, the deciduous trees everywhere you look are making preparation for the coming winter months. Reds and yellows and even purples are starting to reflect the fact that autumn is on the way. Most of us understand an overview of why trees change color but the processes involved are very interesting and far more complicated than you would think.

Leaves in deciduous trees typically appear green throughout the growing season because of a protein –pigment known as chlorophyll. Going back to 7th grade science class, we all learned that chlorophyll is the magical chemical that transforms light and solar energy into sugars and starches which are the basic food stuffs for all plants and animals. Through these photosynthetic processes, other by products like Oxygen or Co2 are either created or broken down. What we weren’t taught is that chlorophyll must be constantly replenished in the leaf since it is broken down and destroyed as it performs this life giving process.

Replenishment is done by Chloroplasts which are found throughout the leaf and are tiny cell organelles or miniature chlorophyll factories. These work all growing season long ensuring that the leaves on a tree remain green and keep doing their job. In fact, there is so much chlorophyll being produced that the green color masks the other pigment colors that are found naturally in the leaves.

What is interesting to me is that chlorophyll production is directly linked to the calendar. As the days of autumn approach, daylight intervals become shorter and the nights become longer. Almost automatically, like flicking a switch; the diurnal light period clock found in all plants clicks on and shuts down the chlorophyll production in the Chloroplasts. With no more Chlorophyll being produced and the decomposition rate of this wonderful protein being constant, the green color starts to fade from the leaves.

This is where it gets interesting, as the green color fades away in the leaf; the other hidden colors inside the leaf now become apparent. The hidden colors coming from the Carotenoid pigments are typically yellow while the Anthocyanin pigments now showing are usually reddish and purple. Both the Chlorophyll and Carotenoid pigments are produced by the Chloroplasts, but Carotenoid production continues into fall since it is not light interval dependent. The reddish colored leaves come from Anthocyanin pigments that are produced throughout the plant after the growing season.

Although light is the reason that we see color change in our deciduous trees, the amount and brilliance of these colors is directly related to the weather conditions during the onset of fall. Temperature and moisture are the main influences. A succession of warm sunny days and cooler nights is often responsible for the most striking of color displays. Warm sunny days and the gradual closing off of the veins in the leaves means high levels of sugar production which in turn brings about the deep purples and reds found from Anthocyanin production. These darker pigments coming from Anthocyanin have many uses in the plant and they act as a sunscreen which protects the leaves from the harmful effects of bright light during this time period. This chemical is usually found when sugar levels in the leaf crescendo during the last days of autumn. By protecting the leaf from sun damage during this time, Anthocyanin helps deliver the remaining sugars found in the dying leaves to the rest of the plant while it prepares for the long winter ahead.

Another factor that contributes to autumn brilliance in the northern forests is the amount of moisture in the soil. Soil moisture varies greatly from year to year and no two seasons are exactly alike, a late spring or a severe summer drought can delay the color change by a few weeks. Even an Indian summer culminating in a warm fall can also lower the intensity of the autumn colors.

Finally, after the leaf has sealed itself off by thickening the basil cell structure of its vascular structure, it dries and falls to the forest floor where it restocks the soil with nutrients needed for another season.

Agave species of cacti dot desert with their prickly beauty