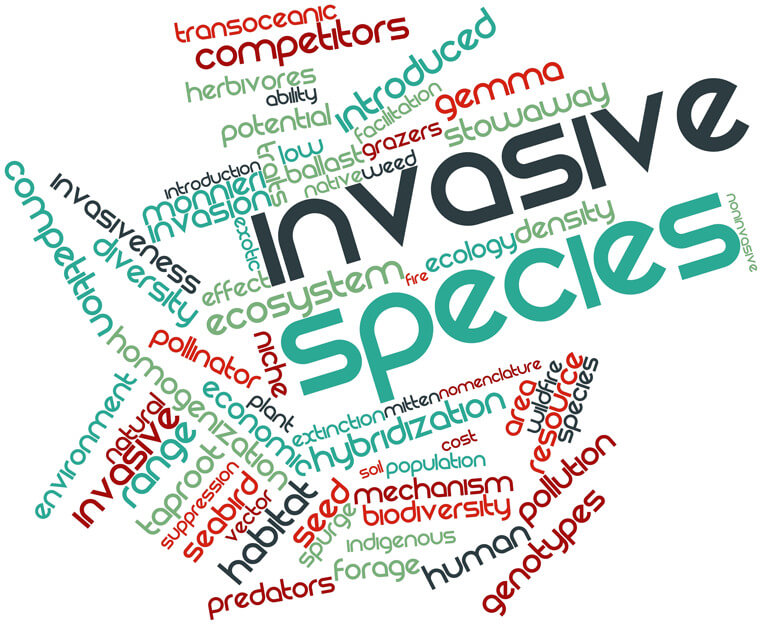 Invasive species! This is the watchword for all the environmentalists and conservationists here in not only San Diego, but throughout the great state of California.

As a landscape enthusiast, I have come to watch with great sadness the willful extermination by the coastal lagoon conservancies of some of my favorite palms like the Phoenix Canarienses growing in the estuaries. This regular use of glyphosate (the key ingredient in Round-up) affects our environment tremendously.

Recently, glyphosate use on genetically modified foods has been directly linked to Autism due to the creation of biologic nutritional deficiencies and systemic toxicity.
There are many other types of invasive species, Pampas Grass from South America, Blue Gum Eucalyptus from Australia, Water Hyacinth from the Amazonian Basin or the Mexican Feather Grass from our very own South West. Stipa is now considered an invasive species to the Australians where it has found a new home and a place to proliferate to the dismay of the native grasses already established there.  Some counties in California also list Mexican Feather Grass, (even though it is from North America) as an invasive plant because of its tendency to spread quickly in the environment. Interestingly enough, we have planted it the entire length of 101 in Solana Beach!
Invasive plants, and animals are all basically living creatures that come from other places in the world where they have established a niche in the environment that allows them to survive in a controlled fashion. In their native environments, over proliferation is prevented by an ecological and environmental balance in the bio zone.  When these creatures or plants arrive in another locale where the environment is well suited to them without the threat of predators, chemical challenges or food restrictions, the invading population tends to burgeon and disrupt the already iffy ecological balance that our environment is trending towards.
As momma nature shifts gears daily contending with the effects of drought, higher temperatures, and deforestation in our suburban and forested areas, these “Invasive Species” whether they are plant or animal always have an impact on our biosphere and our lives. Man, it turns out is typically the unwitting progenitor of these environmental errors of judgment and has caused great environmental disasters in many portions of the world.
Typically, ship traffic to new ports where water ballast is taken on or expelled is the main culprit for water borne invasive plants. Even land based equipment moving through pristine forests during fire fighting exercises has carried unwanted ground cover or non native species from one bio zone into another.  Fire that was once considered a natural process now becomes a double whammy to the environment as the old growth forests or Coastal Chaparral that were once creating a bio zone for many living things become a blank slate ready for an occupation by invasive species.
What is interesting about invasive species is that, although many times the negative aspects of the plants will out weigh the benefits of having this plant in the environment, some non-natives are actually beneficial to agricultural and environmental uses. The Water Hyacinth which came to California way back in 1904 grows so quickly that it can create a matt of weed 6 ft. thick upon the surface of the water in the proper conditions. The problem with this is that it completely obscures the light in our water ways and quickly kills the native plankton and algae that exist to feed the native fish living there. Even worse, as the old plant material at the bottom of the matt starts to die and break down, the bacteria doing their underwater work, rob the water completely of oxygen and make it a dead zone.
One positive we have found out about the Hyacinth is that it shows great promise in Sewage Treatment. With its great proclivity for sucking up nutrients from out of ponds, the Water Hyacinth turns out to be very efficient at cleaning up organic effluents and waste products. Today new control methods are being tried using two weevils and a fungus to control it naturally, but at this point, control will amount to millions of dollars spent each year in our water ways without hope of eradication.[/fusion_builder_column][/fusion_builder_row][/fusion_builder_container]

Agave species of cacti dot desert with their prickly beauty